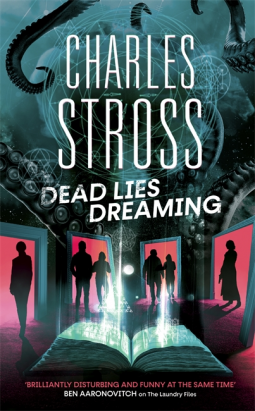 Synopsis: It’s an alternate London in the Laundry Files universe, but with a fresh start of characters and topics, and hopefully less tentacles. An anarchic robber gang, the transhuman “Lost Boys”, stage several robberies. Their ultimate goal is to fund an avant-garde Peter Pan adaption titled “Dead Lies Dreaming” where “Peter was nothing if not pansexual”.

There is a certain risk with those criminal acts, as the new power in Downing Street – headed by an Elder God reintroduced the Bloody Code which “prescribed death penalty for pretty much everything above the level of a parking ticket”. Even Santa falls under that law:

[He] saw four elven warriors shackling a Santa to a stainless-steel cross outside Hamleys Toy Shop. […] When the alfär executioner held his heavy-duty electric screwdriver against Santa’s wrist, the screams were audible over the rumble of passing buses. […] Doc squinted at one of the execution notices taped to the lamp posts. “Huh. He’s an unregistered transhuman.” Superpowered, in other words. Like us went without saying. “Identifies as, well, Santa. Guilty of breaking and entering, animal cruelty, flying under the influence, violating controlled airspace—” his eyebrows rose steadily—“human trafficking, slave labor, shoplifting toys, breaking rabies quarantine with reindeer.”

The story follows the gang as they get a special job uncovering an occult book, the famous Necronomicon. Their quest leads them through a inter-universe dream-house on a time travel back into London’s Whitechapel – as ugly as a Brasilian favela back then – in the year 1888. Incidentially, that’s Jack the Ripper’s year.

On their heels, a couple of heavy-armed Russians, and a so-called Mr Bond try to uncover the same item. But the book is highly dangerous itself, protected by wards, and driving mens’ soul to madness.

Review: That longer citation set the comical horror tone of the whole novel. I don’t appreciate horror at all, but in this case it was light enough that it didn’t cause any nightmares (yet). In fact, it is more a thriller with lots of action and shooting than anything else. The transhuman powers and the magic system was introduced very carefully and was amusing first and fascinating later on when the whole setting unfolded. Stross did a masterful job with the novel’s world building.

He probably harvested a lot from his long running Laundry Files series. I just cannot comment on this background, because I haven’t read anything from it, and the novel never gave me the feeling that I missed anything. So far, I’ve read from Charles Stross only his novel Accelerando with the great novella Lobsters, and some other short stories. Dead Lies Dreaming is far lighter with technical terms than Accelerando and easier accessible. It’s a real page turner, never letting up the action and heist story.

I could have lived without the character of Mr Bond who read more like an over-the-top parody and whose plot-line could have deleted without larger impact. Most of the over characters were well-done. The author pushed in LGBTQIA heavily into this story, as we find transgender and multiple homosexual characters in the Lost Boys. I liked them all and cared for them, but in the end it was really a story of two siblings: The leader of the gang Imp and his sister Eve working as executive assistant for an ultra-rich asshole. Their family has a lot of burdens – their father is dead, and the mother in a sanatorium for mages. Stretched over the whole novel, their history and relationship become clear, and I loved the way Stross introduced it bit by bit.

The style crosses several subgenres of speculative fiction: There is some Cyberpunk in it, but Stross never gets too far into infodumping the newest cryptographic terms. He touches lot of occult Lovecraftian elements, and they give far more than an atmospheric twist, because they are essential for the setting and for the plot. And there is the comical superhuman aspect, where many protagonists have one or the other form of special abilities. Stross juggled those subgenres marvelously and weaved them into a action-heavy thriller.

It’s a perfectly enjoyable, giggle-infusing, and well rounded novel in all aspects, and I fully recommend it. I’m very looking forward to the next volume in this Stross come-back.

This entry was posted in Fantasy, Novel and tagged Fantasy, LGBTQIA, Novel. Bookmark the permalink.