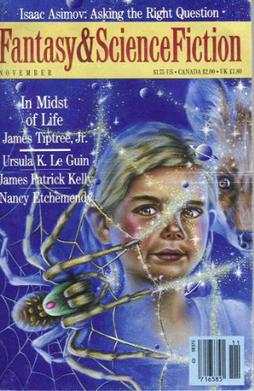 “You fell out of the sky,” the coyote said.

Somewhere in the Southwestern US desert, little girl Myra survives a plane crash and drops from our ordinary reality into the mythic world of native magical animals. She becomes a part of the animal community and talks to trickster Coyote, wise matriarch Grandmother Spider, prince Horse, just to name a few of the so called Old People. The story isn’t exactly a tale for children – not only because of Coyote’s swearing, her talking with her shit, but also because of her fucking around – sometimes incestuous, just like in real life. Myra lost her right eye, and is shamanistically given a new eye made of pine pitch which gives her a twicefold strange vision of reality.

This intriguing story gives a lot food for thoughts and urges you to cross the border, just like Myra and Coyote. At the same time, it manages to stay on the light, humorous side. To get into that mood you might want to listen to the eponymous folk song which resembles the story’s style perfectly. It is one of the best examples of magical realism and true to Le Guins calm, and beautiful prose. Just don’t expect action in it. Alter your sight to get Western clarity and emotional depth at the same time: the human and the animal ways of seeing. It truly deserves the Awards of 1988.

Meta: isfdb. Published November 1987 in The Magazine of SF&F. It won the 1988 World Fantasy and the Hugo Awards, and was nominated for a couple of other awards.

This entry was posted in Science Fiction, Story. Bookmark the permalink.