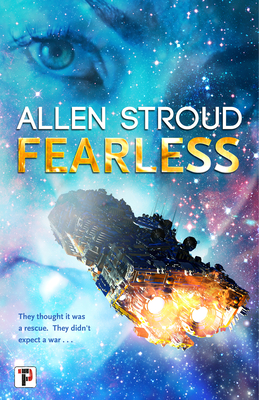 Resilient is the second novel in Stroud’s new Space Opera series, after Fearless, which I liked quite a lot (review is here) for its high octane action. How does this successor fare?

It starts at an unexpected place, the Atacama desert in Chile, where the world’s biggest solar array has been built. A terrorist attack destroys this central energy provider and endangers the world’s subsistence. All eggs in one nest – I couldn’t believe this extrapolation of our globalized energy system, because it’s way too fragile, not only in destroying that central location but also the oversea energy transmission lines. Stroud would have better stayed in space with his narration.

After this bad start, the novel heads on to well-known territory from Fearless. Captain Shann is demoted from leading the seized spaceship Gallowglass by her crew. They want to rescue one of their crew and then head for Phobos Station in Mars’s orbit.

Add a new point of view by physician Emerson Drake. He is a colonist on Mars who seeks to get full citizenship. Turns out that the Mars development corporation doesn’t only rarely passes those citizenships which comes along with easy access to air, water, and food. Everyone else is kept on a a tight reign. No wonder that there are activists and terrorists around, right?

Now, Drake is called to an emergency assistance up on Phobos Station where he should help a group of injured miners. Which are actually a group of terrorists conquering the facility. Drake finds himself in the midst of that hostile undertaking.

That terrorist from Atacama desert? That’s another point of view, her name is Natalie Holder. She’s a elite ninja fighter working for a mysterious force. Her masters transfer her consciousness from one clone body to the next. After the Atacama incident, she breaks free from her bonds and her consciousness is transferred somehow to Phobos Station. She meets Drake there, allies with him and fights the insurgents.

The novel is very much like the first one, and adds cloning and consciousness projections as a central topic. Both are not exactly new, but done very well. They should check off any SF nerds’ needs.

So, why only three stars? Stroud builds his novel on many different POVs, switching very often. All of them are first person present tense. In the beginning I had to struggle to recognize who’s in charge and who’s who anyways. Some of the protagonists kind of merged in my mind and I had to concentrate and backpaddle to keep track. That wasn’t enjoyable at all. Add to that some lengths which the first novel didn’t have and the bad start and you’ll understand why I had to subtract one star.

Other than that, I liked the novel well enough and think that the built up mystery is heading for a very interesting next volume. Anyone who liked the first novel should read this one!

This entry was posted in Novel, Science Fiction, three stars. Bookmark the permalink.