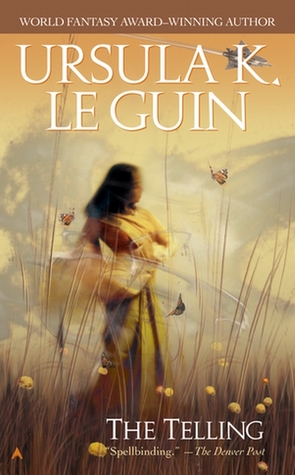 Synopsis This novel is set in the Hainish universe, Le Guin’s last novel in that cycle and also the first Hainish novel after her phenomenal The Dispossessed (my review). You can read it perfectly well as a standalone, although I recommend reading her Left Hand of Darkness and The Dispossessed first – not because there would be a huge logical connection beside the general setting, but because these two novels are the magnum opus of Le Guin.

The Telling follows Sutty, a human from India and a specialist in language and literature, working as a diplomat for the Hainish Ekumen on planet Aka. Aka was a backwater planet some years before and its society transformed heavily towards a fundamentalist monoculture with technophilic orientation due to Hainish technology advancements.

Sutty experiences a mix of political and religious conflicts between a horrible suppressive central government and an indigenous culture. The old beliefs and customs have been banned by the state. It takes a long time before Sutty is allowed to leave the controlled environment of the sterile capital city with its “producer-consumers” into the rustic country-side where the indigenous people live.

There, she slowly finds traces of a (forbidden) oral tradition, the titular Telling – imagine Tibetan practices in a Chinese environment during the Cultural Revolution, or in Aka’s terminology “The March to the Stars”. She digs ever more into this fascinating culture, trying to find (forbidden) books and learn (forbidden) practices. Ever hard on her heels is a government agent who tries to find the last (forbidden) library of the indigenous people.

Despite the fact that it was all banned, all illicit, people talked to her quite freely, trustfully answering her questions. She had no trouble finding out about the yearlong and lifelong cycles and patterns of feasts, fasts, indulgences, abstinences, passages, festivals. These observances, which seemed in a general way to resemble the practices of most of the religions she knew anything about, were now of course subterranean, hidden away, or so intricately and unobtrusively interwoven into the fabric of ordinary life that the Monitors of the Sociocultural Office couldn’t put their finger on any act and say, “This is forbidden.”

Sutty’s new found friends suffer on the agent’s repressions, though they secretly accompany Sutty deep into the mountains to find an old monastery and center of wisdom.

Can Sutty and the Ekumen save this culture who is about to get completely destroyed?

Review A human visitor witnessing the traditions of a strange culture is the essence of Le Guin’s anthropological SF. The Telling doesn’t deviate from that topic. It features Le Guin’s interpretation of industrial revolution, Taoism, and Chinese long way to modernity, and is as such relevant as 20 years ago when it was published.

The author’s narration feels grounded, as the reader can immerse into smells, sounds, colors, and every day rituals

Yellow of brass, yellow of turmeric paste and of rice cooked with saffron, orange of marigolds, dull orange haze of sunset dust above the fields, henna red, passionflower red, dried-blood red, mud red: all the colors of sunlight in the day. A whiff of asafetida. The brook-babble of Aunty gossiping with Moti’s mother on the verandah.

It’s not everywhere as flowery as this citation, but you can get the gist of it. Add to this lucid prose a good portion philosophical explanations, an extremely rich setting filled up to the last nook, and remove any notion of a juicy Space Opera’s spaceship battle.

On the negative side, I found the novel somewhat heavy-handed in messaging, and burdened with exposition.

I didn’t need the action to get moved and involved. Starting with the horrors of an oppressive state it soon soothed my reading tastes with the beauty of upcountry traditions.

The novel is linked to a similar novella, The World for World is Forest (review) which has also pacifist people with a strange tradition threatened by Terrans. But this novel is not yet another retelling of the same topic. It expands and transports the reader to a rather new world and situation, extrapolating Asian issues to a different planet to provide the reader with a different angle. That’s SF’s core value!

While it doesn’t have Left Hand of Darkness’s outstanding quality, the novel nevertheless won the Locus Award and is well-worth reading, didn’t age at all. Time to immerse yourself in another book by Le Guin!

Interested in other reviews of Le Guin’s works? I’ve read much of her work but not reviewed enough:

This entry was posted in four stars, Novel, Science Fiction. Bookmark the permalink.