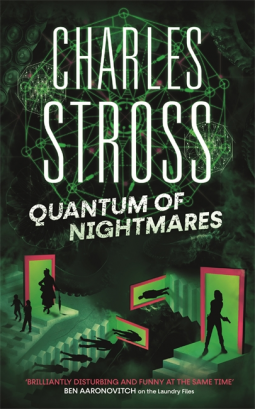 Synopsis: Quantum of Nightmares is the sequel to Dead Lies Dreaming, set in an alternate London in the Laundry Files universe, but with a fresh start of characters and topics.

The book takes up exactly at the point where it left Dead Lies Dreaming: Eve Starkey sent her boss Rupert into oblivion. Now she’s in charge of the company. Searching through a secret stash she finds out that her boss has set up lethal magical and physical traps for her. He wants to get back from literal hell through some occult ritual involving human sacrifices. The order’s base where such a ritual will be conducted is located on one of the smaller Channel Islands modelled after Sark. Rupert bought the island and profits from its feudal governance with mediaeval laws. She gets help from her brother and his heist gang, the “Lost Boys”, just like in the first novel.

There is also Wendy Deere who investigates a London-based supermarket chain. They are testing bleeding-edge technology, robots automatically boning livestock and feeding the meat into a 3D printer which produces customer-specific meat products.

Eventually they plan to have vats full of animal tissue culture in every branch, feeding it to 3D printers on the deli counter – meat products without animal cruelty and the risk of another Mad Cow Disease epidemic.

Just wait for those mincemeat golems (no, that’s no joke) called “meat puppets” to replace the expensive human workforce!

A third plot line involves Mary, stepping in as a nanny for the children of two superheroes who are about to leave for some super-urgent mission abroad. Now, that one isn’t a cute Poppins at all, but she has the mission to kidnap the kids. If only the children wouldn’t have powers of their own, the job would be far easier.

The little girl’s face was buried against the side of her neck like an infant vampire, but her quivering shoulders signaled manipulative sobbing rather than sanguinary suckling.

Review: Stross kept the comical style from the first novel, but strengthened the horror aspect by a multitude. When it was light horror in the predecessor, it includes absolute disgusting details up to projectile vomiting here. You have a sensitive stomach? Do yourself a favor and don’t dive into this novel’s guts and bloods. The synopsis’s hint of meat production should be enough to figure out what I’m talking about. If you get any Sweeney Todd vibes, that’s totally intentional!

There are a lot of funny situations and dialogues where I had to laugh out loud. They just couldn’t counter the super bad feelings I’ve got from the nauseating descriptions.

Usually, when I soldier through such revolting parts and make it past the halfway-through mark, I continue to the end. This novel had a special, extremely uncomforting and disgusting sentence at around 75% for me:

If anyone of you doesn’t recognize this idiom, let me tell you that it’s a Nazi slogan “Arbeit macht frei” at the entrance of concentration camps.

This crossed a red line. Coming out of nowhere, without context, this idiom isn’t funny at all, and I consider it unacceptable to include it that way.

I could barely go on.

Mind you, the novel has its qualities. It’s a fast page-turner, a superhero thriller with Cthulhu vibes, just like the first volume. But Stross turned up the volume of all the elements I hate, especially of horror and disgust factor. If you like those and you’re not especially sensitive about holocaust, then you will like this book.

This entry was posted in Fantasy, Novel and tagged Fantasy, LGBTQIA, Novel. Bookmark the permalink.