A Practical Guide to Conquering the World • 2022 • Military Fantasy novel by K.J. Parker 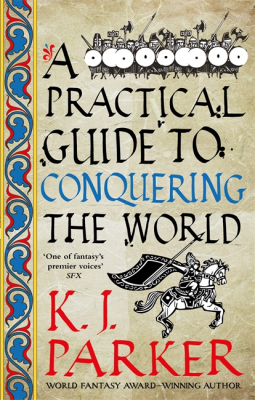 Synopsis: We follow the improbable quest of translator Felix, on his way from suddenly being the last of all Robur (read: Byzantines) at the court of the Echmen (read: Chinese) emperor, savior of the barbarian people called Hus (read: Mongolians), founding a new religion, becoming a prophet, to conquering the empire of the Echmen and then of the rest of the world.

Felix inadvertently saves a young princess of the Hus from being executed by the Echmen by pointing out a translation error.

The Echmen are extremely focused on paperwork and procedures, and when they find out that the Robur people have been extinguished (as described in the previous two volumes of this trilogy), there is no need for a Robur embassy anymore. Felix’s boss and colleagues are killed and only he is spared, because he’s adopted by the Hus out of gratefulness. That’s how he became entangled with their fate.

The next step is that the Echmen want to build a huge Wall (read: the Chinese Wall) at their border, and they need people for doing the job. It’s only logical that they slaughter the Hus leadership and enslave the Hus people. This leaves the princess as the queen. Felix has to rescue her once again out of the palace.

One might think, that all this rescuing sets up the two for a big romance. But the author has different plans for Felix. First of all, he isn’t up to the task of romancing around anymore, caused by reasons which led to his exile at the Echmen court. Secondly, the princess is one hell of a young adult.

Review: This is the third book in the Siege trilogy, which started with Sixteen Ways to Defend a Walled City, where snarky and nerdy Orhan rescued the Robur city from invasion, followed by How To Rule An Empire and Get Away With It featuring professional liar Notkar playing the game of “Sudden Emperor”.

I wouldn’t recommend reading this novel as a standalone, because there are several tight references especially at the end of this book to the other two. Also, and this is already a summary of this book, I enjoyed the first novel far better than this one.

In general, the story has the author’s trademark elements. A snarky, funny first person protagonist stumbling through one difficulty after the other on his implausible crazy journey. The quasi-mediaeval world, almost but not exactly resembling our own. No magic at all. A fast flowing plot with lots of funny moments. In contrast to the other two novels, this one isn’t bounded with a close environment like the walls of the City, but opens up to the whole world. Yes, you will have armies shuffling around in strategical and tactical movements, battlefield tricks playing out, and you will get to know several different kinds of people, including the Swiss.

A lot of these battles and tricks are references to history, and neither Felix nor the author shy away:

If imitation is the sincerest form of flattery, plagiarism is practically a declaration of love.

While this standard recipe usually works very well for me, I had several issues this time, lessening my reading experience:

I also understand that there are reviewers who had issues how Parker addressed and embedded PoC in his three books. If you’re sensitive, you might want to avoid this book.

Those were minor issues, and overall I liked the book, just not in the way of the first two, and I would still recommend it. If you’ve read the first two, you won’t want to miss this concluding book, anyway. It was good for many giggles with its deadpan humor, and it’s a really fast-paced read.

16 Responses to A Practical Guide to Conquering the World • 2022 • Military Fantasy novel by K.J. Parker