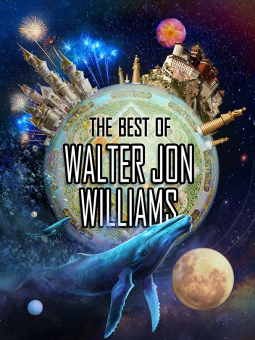 Walter Jon Williams surfed the Cyberpunk wave in the 1980s, but never committed to one particular subgenre. This collection has twelve of his story spreading over 600 pages and demonstrates the variety in his styles. The reader never gets bored by the same trope but finds himself in ever fresh settings, ranging from posthuman, time travel, far future, first contact stories to completely different genres like a Californian Gold Rush Weird Western or a Lord Byron/Shelley Alternate History.

The best story here is his “Prayers on the Wind” which shows us how humanity would fare as a society of Tibetan Buddhists in space, confronted by an alien captain Kirk. Most stories are above average, and his story notes were partly amusing and always enlightening.

Highly recommended for readers of SF and speculative fiction who are up to some variety in their daily meals.