The Very Best of the Best: 35 Years of The Year’s Best Science Fiction • 2019 • SF anthology by Gardner Dozois 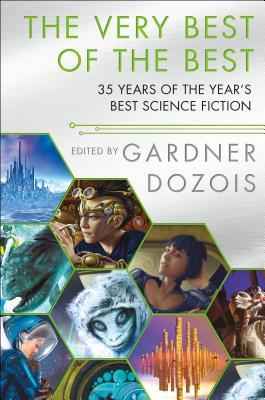 Dozois published 35 annual anthologies with his selection of the best SF stories of the previous year. He concentrated those 35 books even further down to three volumes by selecting the best of those:

The first anthology covering 1983-2002, another one publishing only novellas (which I haven’t read yet), and now this anthology covering SF stories and novellas from 2003-2017. Insofar is the title misleading, as this volume is only one of three collecting the best SF short works; and also, they “only” publish works which have been published in his annual anthologies.

Sadly, Dozois passed away shortly after that, so this really concludes his life’s work as an editor.

The annual anthologies are really monstrous doorstoppers. Everyone who reads anthologies knows that they take far longer to digest than any novel of the same size. And it isn’t healthy to read through them like a novel. My mode is mostly one or two stories per day, and writing a review for each one – you’ll find the reviews linked below with every story.

What is to be expected from this anthology? First of all, a huge amount of stories: 38 stories spread over 686 pages. In comparison to the first anthology, nearly all of the stories are actually core SF in several typical subgenres. Dozois tended to select literary stories which might not be to everyone’s taste, but fit mine very well.

The anthology is exceptionally good, the first five stories already outstanding. There are a couple of five star stories in it, many four star stories, and only one bummer. While the average grade is around four stars, I’ve rounded up to five stars – because anthologies can’t be assessed on an average value only: Most anthologies have a lot of stories in them which don’t fit one’s taste at all.

I can fully recommend this anthology for readers of SF created in this millenium.

Contents (stories are ordered from oldest to newest):

10 Responses to The Very Best of the Best: 35 Years of The Year’s Best Science Fiction • 2019 • SF anthology by Gardner Dozois