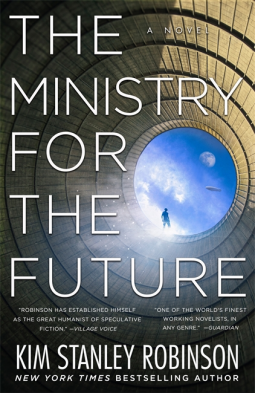 Synopsis: It’s 2025, the founding year of the Ministry of the Future which is an agency established in Zürich, Switzerland, to ensure health and safety for the generations to come.  A heat wave crawls over rural India just before the yearly monsoon, killing twenty million people, and everything changes.

The story follows Mary Murphy, head of the new ministry, and tells her troubles founding the ministry, bringing banks and governments to political agreements over climate issues, and her long way to retirement. Her live is interleaved with that of Frank May, the sole survivor of the heat wave.

Review: This clifi is a very typical Kim Stanley Robinson novel: Less of a plot, more of a speculative extrapolation. Where his New York 2140 featured the rising sea level, his new novel focuses initially more on the direct impact of higher temperatures with the dire killing of people who cannot flee into cooled buildings, because there are none. This is not the only place which KSR lets the reader visit, but also beloved Antarctica with updated climatic implications since his great novel of 1997.

Another central showplace is the city of Zürich. As I lived there for a year, I can assess, that KSR’s lovely descriptions of the town are top notch, and I once again fell in love with this place.

The author wouldn’t be himself if he wouldn’t introduce some radical protagonists into his story who try to change the way our capitalistic world works. In this case, the trauma of the heat wave radicalized Indians who call themselve the “Children of Kali”, a Hindu goddess of Destruction. He envisions them to destroy the whole aircraft business by bringing planes down using an army of small drones directed into the flight paths of the planes. The message is obvious: stop flying, and the industry follows. But they don’t stop there.

Robinson offers an optimistic view into the further future, one where humanity can overcome the climatic change using terraforming technologies, a reformed capitalism disempowering the connection between banks and governments by issuing a blockchain certified carbon coin, and wiping away crappy Facebook by implementing a people owned and operated new Internet.

He finds many angles which are needed to save our children’s world, some may be naive, others could be counterargued. But together they form a holistic view that could work – something that I’m missing in so many dystopian clifis of these days.

I can fully recommend this Near Future Hard SF for everyone who doesn’t focus on plot or character but wants to see a solution oriented future of climatic change.

This entry was posted in Novel, Science Fiction and tagged sci fi. Bookmark the permalink.