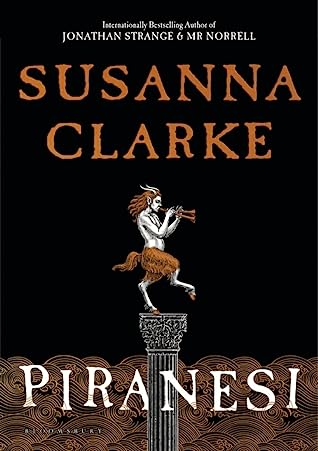 This is a spoiler free review.

Synopsis: Piranesi is a man living in a world of its own, a huge palast with hundreds of rooms filled with statues, and at the low level the sea’s tides washing in. He can’t remember his past but keeps track in note books. He lives of dried seaweed and fish, exploring the rooms. There are exactly fifteen people known to him in this world, and thirteen of them are dead, only the Other man talks to him twice a week.

Review: This novel is a puzzle which unfolds as the reader gets to understand more of Piranesi’s world.

Piranesi is a scientific man, always optimistic, and friendly to each and everything. One could describe him as a simpleton at first, but he is just happy with his world, and he thinks through his discoveries, is resourceful, and takes action when necessary. The setting is very strange in a psychedelic sense, though charming in its own ways.

I’m a fan of Susanne Clarke’s prominent novel “Jonathan Strange & Mr Norell”, and would have loved to give this book five stars. But I found out that it’s very different from her first book.

It feels more like an extended novella, hiding its secrets like a short story from Gene Wolfe. Similar to his stories, Piranesi is an unreliable narrator having lost most of his memories, throwing the reader into this world like a newborn child.

The fascination held only halfway through the book and I after having worked on the solution, I waited for a larger uncovering, secrets within secrets to unfold. But they didn’t and that was a small disappointment, because the secret didn’t carry the novel long enough, it dragged on after a while. That setting was fresh and interesting for a few paragraphs but weared off like the mystery behind it all.

The unpopular opinion is: I enjoyed it, but don’t think that we have a masterpiece in our hands.