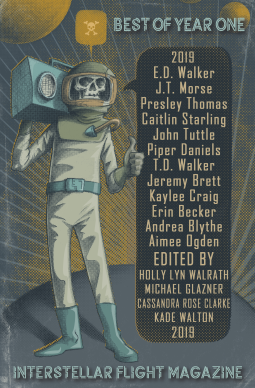 Summary: As with many magazines, you can flip through the pages and read what catches the eye. Or scan the table of contents and go for specific essays. This volume has articles of various kind – everyone will get their good share of enjoyable information. My highlight – and the reason why I requested this ARC – was Holly Walrath’s “The Ones Who Walk Away”, an essay about Ursula K. Le Guin’s famous utopia “The Ones Who Walk Away from Omelas” (and Jemisin’s counter-story). The article about Libraries was a happy find, and I enjoyed the Indie Gaming article. Some other interviews were unimportant for me, and I skipped them, others felt shallow and too short. In summary, there was too much focus on YA or horror in the interviews, and the second half fell flat for me.

While I enjoyed this anthology, I find the price a little bit steep for the amount of valuable information.

Contents (stories are ordered from oldest to newest):

This entry was posted in Anthology. Bookmark the permalink.