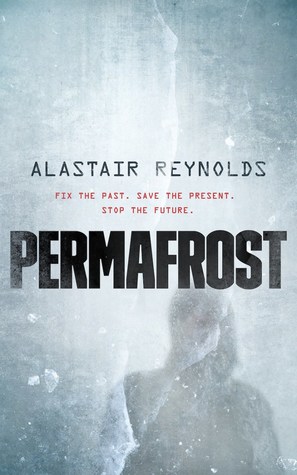 Synopsis: The title picture declares “Fix the past. Save the present. Stop the future.” covering the essence of this 130 pages long time travel / clifi novella. It follows 71y.o. lame mathematics schoolteacher Valentina Lidova, whose mother invented a method to interact with the past. The base time is 2080, after a world-spanning catastrophe “The Scouring” which killed all the insects, leaving plants unpollinated and everyone malnourished.

A dedicated scientist started the Permafrost Retrocausal Experiment situated in the ever frozen Sibirian Yenisei Gulf. They send particles back in time into human brains which they can control remotely from upstream “pilots” – Valentina is one in a team of five. In a supporting role are the Brothers Karamasov, four artificial intelligences sorting out the Quantum entanglement and keeping low the time paradox effects. The team’s ultimate goal is to rescue a package of seed variants to restore Earth’s biodiversity in a last-ditch effort for humanity’s future.

Valentina links downstream with Tatiana in the year 2028 before the scourge. She finds out that the connection is unexpectedly bidirectional and has some harsh discussions with her host. They soon find out, that some things turned wrong, and the need to “Stop the future”. In fact, the very first sentence of the novella is priming the reader for the upcoming problems:

After I shot Vikram we put our things in the car and drove to the airstrip.

Review: I love having elderly heroes in stories, and Valentina is a very likable and believable one. The narration constantly switches timelines in a non-linear fashion – not to confuse the reader but to keep the tension arc flowing and interesting. In fact, Reynolds weaves a page turner from the very start up the last page, and the story just kept flowing smoothly. It is set in the Sibirian Arctic Circle which kept me googling the exotic sites – it is a fascinating landscape which unfortunately played only a minory role in this character-driven story.

Reynolds applied some typical SF tropes with quantum time travels, time paradoxes, and A.I., which keep the protagonists on their toes and drives them into unpredictable problems. The story is tensely narrated and quite short in comparison to his other doorstoppers.

One timeline was especially emotional – Vikram, one of the pilots, was implanted into a dog and he couldn’t abort the operation for many years and the rest of his life. His colleagues found him, but he was really not able to communicate and stayed trapped in that body. His fate moved me heavily and I thought for quite some time about the risks of time travels.

The author delivers in novels, but also in shorter works, and I really recommend this one.

Meta: isfdb. Published in the anthology The Mythic Dream. Read as part of the 2019 Locus Finalists.

This entry was posted in Science Fiction, Story and tagged locus, sci fi. Bookmark the permalink.