The Kingdom of Liars • 2020 • High Fantasy novel by Nick Martell 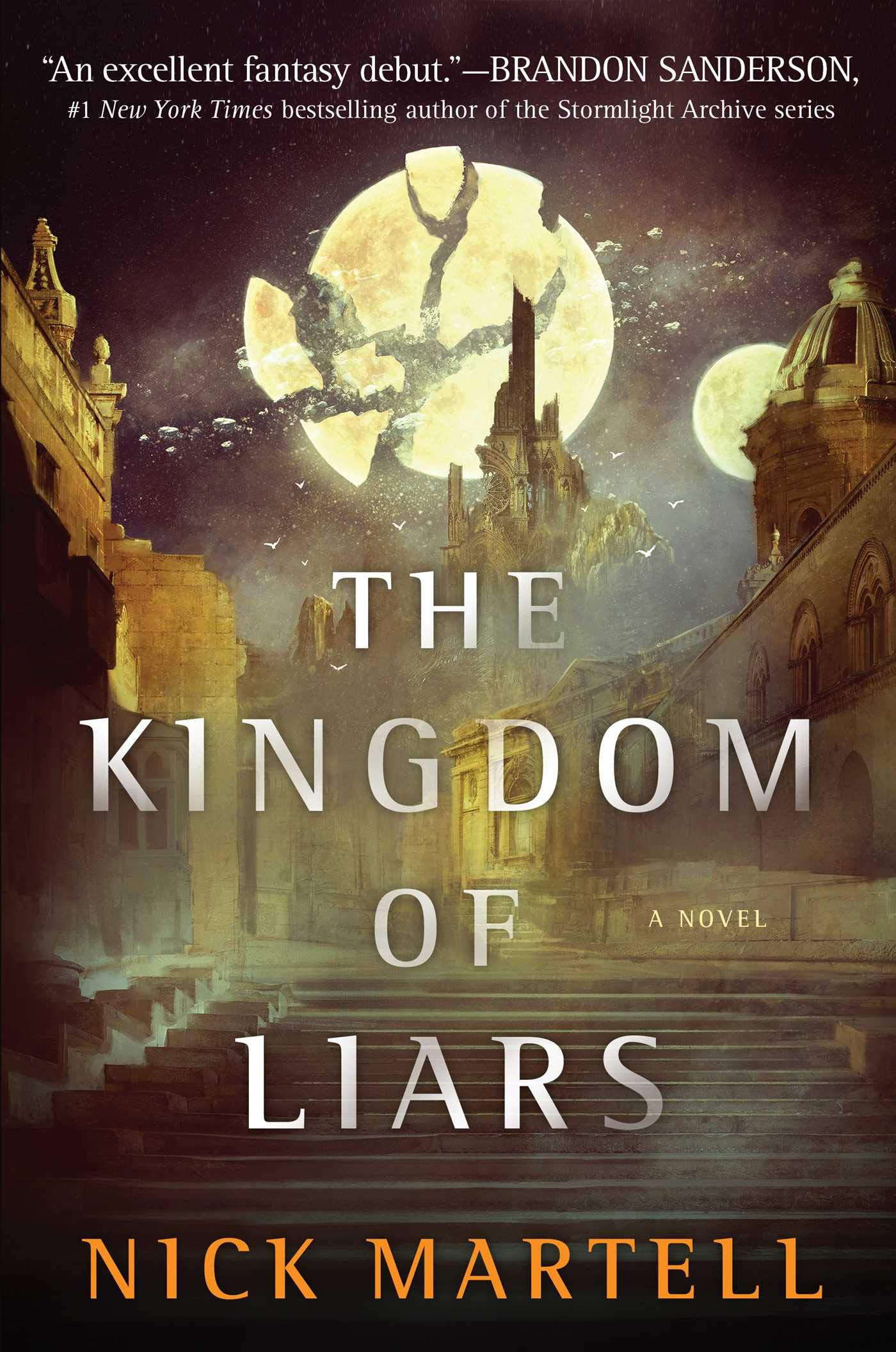 This quite prominent Moon on the cover has been breaking apart since forever. The parts sometimes rain down on Michael Kingman’s city “Hollow” where all of this doorstopper of a novel is situated. The Kingman family has protected the city since its founding, functioning as a check-and-balance for the king’s power. Michael’s father has been executed because he murdered the King’s son. Michael and his siblings have been branded as traitors, and they barely survived the following riots.

Ten years later, Michael hates everything that looks like nobility, and he works as a conman tricking country noble bumbkins from their money. This starts a long winded tale through saving his friends, his family including his mad mother, restoring his name, trying to remember.

It comes up quite early on, that his memories were failing – a side effect of using magic in this world. Only that Michael has never learned, which kind of magic he could wield.

He enters the “Endless Waltz”, a long tradition of Hollow nobility to present their youngsters and marry them off, in order to restore his name and prove that his father was not guilty.

On his desperate way, he meets a drunken madman, an extraordinary deadly Mercenary-sorcerer, a sexy police-girl, and old-new friends that he didn’t remember.

Up to some 40% of this novel, I had to fight the slow turning pages – I found it interesting but way too slow. Only then did it take off, starting with fantasy tropes like a huge library and a full blown, living dragon. The mystery entangled Michael ever more and went into hyperdrive for the whole second part of the novel.

I loved the closed setting and the diversity, liveness of the city Hollow, its contrast between the dark, drug-addicted slums, the shady asylum, the better situated residential homes, and the shiny nobility households. Most characters had their own motives, and played them well according to their characters – there were no damsels in mistress, but strong women driving, bribing, enchanting Michael.

I’m a sucker for unreliable narrators – and Michael fits well into this whole society of liars filling lost memories with their own versions of the truth.  He is a likeable hero, because what he does is based on his main motto “Family looks after family” which he extends to friends. His complex social network with conman-friends, siblings, and new friends ground Michael’s stupid decisions and heroic actions.

As the start of a series, I give the novel some leeway in exposition, but nearly half the novel was too much, too slow for a balanced pacing, especially compared to the reckless speed in the later half.

The last one hundred pages found a lot of unexpected and excellent plot twists, and opened up the setting for further exploration in the next volume of the Legacy of the Mercenary King series. Which I will certainly read. This volume, I recommend with the caveat to be patient and endure the first half – the reward lies in the second half.

This entry was posted in Fantasy, Novel and tagged Fantasy. Bookmark the permalink.