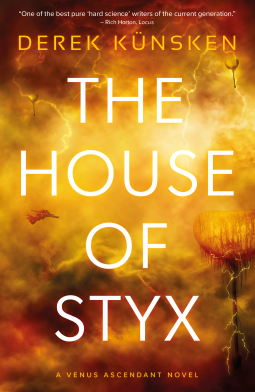 Synopsis: 2255 A.D. Venus is sparsely populated by Québécois descendants. Of course not on Venus’s hard surface, because it is far too hot there and the pressure is also not sufferable. Instead, they built their homes floating in the acidic clouds, strutted by huge bio-engineered jellyfish similar life forms called “trawler”, extracting elements from the atmosphere which are thrown up by the volcanoes.

The story follows the D’Aquillon family living in their habitat Causapscal-des-Profondeurs in the lower levels where it is harder to survive, because they separated from the rest of the colony. The reason for this is that the colony didn’t want to support their child handicapped with Down syndrome. The parents faced the decision to either perform an abortion or live without the necessary medicaments. Their motto is “family first”, so they decided pro life and their firstborn son Jean-Eudes is charming, warm-hearted, and fully accepted by his siblings.

Some of the family members lost their lifes in the harsh environment. Father George-Étienne tries to hold together the whole family. Jean-Eudes mostly raises young Alexis. Separated from the whole family lives their sister Marthe in a habitat high in the clouds. She was sent out as delegate in the Venusian legislative assembly and proves her value as diplomat drawing strings against the Venusian president. Her brother Émile lives with her, because he fled a confrontation with his stubborn father. He is a lazy going poet trying his luck in a love affair with Therese – an interesting, though self-destructive woman who builds up a kind of new religion worshipping Venus by inhaling the atmosphere and aciding herself.

The story’s hero is Pascal, a courageous 16 year old engineering genius. Very early on it is hinted that he doesn’t like his body at all and after a while he finds out that he is really a girl in the body of a man. At this instant, he renames herself secretly Pascale and the story continues as “her” which I found extremely interesting and satisfying.

The novel’s plot develops around a discovery by George-Étienne where he found out that at floor of Diana Chasma, things behave goofy. It is an extreme adventure to go down to the ground in a kind of floating submarine in the high pressure and temperature. They find a mysterious cave there and start exploring it.

Review: This novel starts a new series but has a satisfying ending without a huge cliffhanger. It is mostly Hard SF with one exception that they interpret from their findings in the cave.

SF on Venus was common in Pulp times, when authors invented jungles and dinosaurs, or even high tech civilizations there – this form is called “Old Venus” and authors still write this fiction topic, e.g. in an anthology edited by GRRM and Dozois. In contemporary SF, authors are mostly invested in Mars or the Jupiter moons, but Venus went out of focus. That’s maybe because the living conditions on the ground are hard to describe and living in the atmosphere doesn’t seem that interesting.

That’s why I love this novel: nearly prosaic narration comparable to Kim Stanley Robinson’s visions of Mars describing the several cloud layers with grand views of the transparent layers at Les Plaines and Grande Allée between the cloud decks and the stygian Venusian floor. The inventive, but valid life form of the trawlers, and the humans flying around from habitat to habitat.

It is not only the Hard SF part of this novel with the planet and engineering which fascinated me, but also the social dimension: First the wholesome family centered around a handicapped adult with breaks in its history coming to the foreground later in the story. The founding of a religion. The political workings of a colony depending on a bank which is not exactly altruistic. Those dimensions perfectly balance the narration to a complete setting.

I fully recommend this impressive novel and can’t wait for book 2 in the series.

This entry was posted in Novel, Science Fiction and tagged LGBTQIA, sci fi. Bookmark the permalink.