The Paper Menagerie and Other Stories • 2016 • Collection by Ken Liu 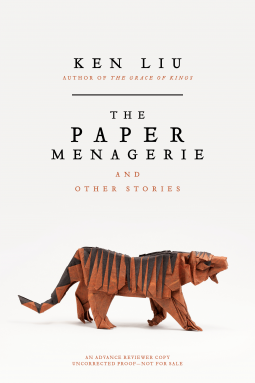 I’ve previously read Lius’s story The Regular and his last year’s novel The Grace of Kings. Both make me think that this could be a must-read. I went first to the eponymous story The Paper Menagerie and after a couple of stories, I realized the author’s diversity in style and topics: I became a fan of this author, as you’ll never get bored, be it tin-foiled sharks or atrocities from Unit 731. Liu often contrasts Western and Eastern culture, placing a Chinese woman in the midst of USA in his awards winning story The Paper Menagerie, or the other way round, placing a U.S. family in the counterintelligence cold war of Taiwan’s 60s in The Literomancer. But don’t reduce the author to this topic alone: The stories’ genres vary between magical realism (State Change), steampunk (Good Hunting), near future SF (The Regular, Simulacrum) or dystopia (The Perfect Match). I didn’t find horror stories in it, although they are sometimes at the border to it, e.g. when describing torture scenes like in The Literomancer. This sometimes bleak realism contrasts fascinating magic or unreal setting which creep into the story, like in State Change where souls manifest in real objects.

Lius’s publication frequency exploded since 2010, the collection contains only one story State Change from 2004 before that year. Now that he started his novels from the Dandelion War, Liu said that he won’t publish that many shorter works any more. An exception would be the excellent, but previously unpublished story An Advanced Reader’s Picture Book of Comparative Cognition which will delight old fans and new. In this sense, the collection is a kind of retrospective and I can fully recommend it.

One constant factor remains: How many U.S. girls curious about Chinese culture will crawl out of Liu’s pen?

My favourite stories were

Meta:  This collection of 15 shorter works was published 2016 by Saga Press.